Thursday night I was lucky enough to attend YA or Bust, featuring Gayle Forman (IF I STAY and WHERE SHE WENT), Nina LaCour (HOLD STILL and THE DISENCHANTMENTS), and Stephanie Perkins (ANNA & THE FRENCH KISS and LOLA & THE BOY NEXT DOOR) at Roosevelt High School in Seattle. If you’re a regular reader of my blog, then I don’t have to tell you how much I absolutely adore these authors. If you are new to my blog: I ABSOLUTELY ADORE THESE AUTHORS. Gayle Forman’s If I Stay was the first YA novel that made me think: I want to write a book like THAT. Stephanie Perkins’ Anna and Lola are two of the most perfectly executed YA romances I’ve encountered. And Nina LaCour’s The Disenchantments… Hands down the best book I’ve read this year.

On Thursday night I learned that not only are the three authors of the YA or Bust tour brilliant and talented, but they’re also funny and gracious and delightful, all of which probably goes without saying. 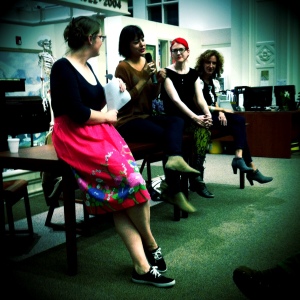 Nina LaCour talking about the research she did while writing THE DISENCHANTMENTS... literal road trips and lots of eighties girl band footage -- Awesome!

Gayle Forman sharing an excerpt from WHERE SHE WENT... I'm about as unemotional a person as they come, but damn it if I didn't have a near-moment while she read aloud from her novel.

A few pieces of takeaway advice shared by the ladies during the panel portion of the evening: Read like a writer; pay attention to your strong reactions (both good and bad), then break down what it was the author did to make you feel the way you felt. Take your time learning craft; knowing how to ice skate isn’t the same as knowing how to throw a Triple Axel — writing a novel is no different. Bird by Bird is the way to go. Understand your characters; get to know them by describing their living space, the things they carry, the way they look, the way they interact. And finally, pay attention to detail, especially during the researching/revising/editing/querying processes.

My good friends (and enthusiastic YA readers!) Kari, Theresa, and me, with Gayle Forman, Nina LaCour, and Stephanie Perkins.

I was thrilled to meet Gayle, Stephanie, and Nina, and I’m grateful to them for sharing their wisdom and experience with readers and writers and fans (and for signing my big ol’ stack of books!). If you’ve slacked on reading any of their novels, please RUN to your nearest bookstore or library and hunt them down. They will change the way you read, and they will change the way you write.

Tell me: What YA novel has changed the way YOU write?

First and foremost, WELCOME HOME to my husband! He spent the last nine months deployed to Afghanistan and arrived safely back at Ft. Lewis last night. My daughter and I are beyond happy to have him home where he belongs, and I hope to share a few pictures from his homecoming in the coming days. Until then, check out what my (awesome!) neighbors
did to my house to help us celebrate:

I love this cover so much!

From Goodreads – Colby and Bev have a long-standing pact: graduate, hit the road with Bev’s band, and then spend the year wandering around Europe. But moments after the tour kicks off, Bev makes a shocking announcement: she’s abandoning their plans – and Colby – to start college in the fall. But the show must go on and The Disenchantments weave through the Pacific Northwest, playing in small towns and dingy venues, while roadie- Colby struggles to deal with Bev’s already-growing distance and the most important question of all: what’s next?

I’m going to go out on a limb right now and say:

THE DISENCHANTMENTS
WILL BE ONE OF MY FAVORITE READS OF 2012.

I loved everything about this book, but particularly the tone (kind of hazy, hippy-dippy and blithe and arty), the voice (upper YA, honest, and completely authentic), and the intense romantic tension between our protagonist,
smart and yearning roadie Colby, and his best friend, moody and mysterious lead singer Bev. The Disenchantments is one of those rare books that had me rereading passages, picking sentences apart to figure out what makes them so simplistic but beautiful.

As Colby and The (beautiful, talentless, and utterly endearing) Disenchantments tour through small, forgotten towns in Northern California and the Pacific Northwest, they meet a cast of eccentric characters who are completely unforgettable. They uncover bits of a family mystery. They also begin to discover themselves and the basis of their relationships with each other, their families, and their futures. It’s a simple concept, yet so very fascinating.

While reading this book, I decided that Nina LaCour is masterful at crafting unique but enviable lifestyles. I couldn’t be LESS arty or musical, but she made me long to go to a creative arts high school, join a crappy girl band, and drive along the coast in a vintage VW van with my best friends,
a bag of pistachios, and a Magic Eight Ball.

Intrigued? You should be! And you should most definitely pick up The Disenchantments when it’s released on February 16th. I bet you’ll love it! (And a big thanks to my friend Rebecca Behrens for sharing her The Disenchantments ARC with me. Check out her review of the book HERE.)

Don’t forget to check out what other Bookanistas are up to today:

What are YOU reading this week?