FEBRUARY 2011 EDIT: I originally posted this teaser back in May when I was drafting Loving Max Holden. Since then, the story has been revised *ahem* repeatedly and has also gotten a new title: Cross My Heart. Now I’m updating the original teaser with the most recent (and best!) version of the scene. Enjoy! 🙂

I’m having all kinds of fun with my WIP! Part of it takes place during Christmas, which is a time full of family and warmth and homey smells and lovely imagery–so exciting to write about. Plus, the love interest, Max, is sort of hot. Here’s an excerpt: 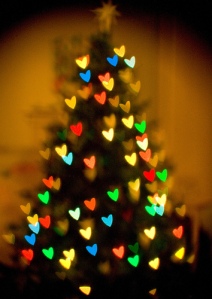 I was expecting him to turn and head for the stairs, satisfied that all was right in the world again. Instead, he shoved his hands into his pockets and glanced up toward the ceiling. He stayed quiet, but his eyes were alight with mischief when they met mine again, his grin back where it belonged. He took a slight step to the right and gave a nod of his head, indicating I should follow. I did, confused but intrigued; Max was rarely evasive. He looked up again, this time pointedly, and I followed his gaze.

A little sprig of green with waxy white berries, affixed with a festive red bow to the archway we were standing beneath.

“You know what this means?” Max asked, the twinkling lights of the Christmas tree dancing in his eyes.

I gave a dry laugh, unwilling to believe he was considering it. “It’s a stupid tradition. Did you know mistletoe is actually a parasitic shrub? Not very romantic, in my opinion.”

Incredibly, he sounded sort of disappointed when he said, “You don’t want me to kiss you?”

Definitely not. It was a horrible idea. Horrible. “Do you want to kiss me?”

“Would I be standing here if I didn’t?”

“How drunk are you, Holden?”

He laughed again, the baritone sound bouncing pleasantly off the walls. “Just drunk enough, I think.” He took my cup and set it and his beer down on the nearby end table, freeing up his hands. “Let’s do this before the game starts up again.”

God, he was serious. Shutting out the voice in my head that screamed bad idea!, I glanced around to make sure we were still alone. Then, against my better judgement, I took the tiniest step forward.

We were close, closer than we’d been in years, and I inhaled, needing oxygen to ease my nerves. Oh, he smelled very good, a clean woodsy scent that reminded me of evergreens and hiking and moonlight. Before I could sort through the zillion contradictory thoughts racing through my head, I gazed into his eyes. Everything—my knees, my pulse, my resolve—went weak.

“Jesus, Jilly, you look scared shitless. We don’t have to.”

He rested his hands on my shoulders. “You’re sure?”

I closed my eyes as he slowly leaned in.

It was different than I’d imagined, not awkward or forced like it probably should have been. Instead, it was warm and tentative and soft. It felt good and I kissed him back, matching his surprising tenderness. He slid his hands from my shoulders, under my hair and along my neck until they were against my cheeks, his calloused palms gently cradling my face. He was kissing me like it was something he’d wanted to do forever.

When he pulled away for one terrible second, I thought it was over. Then the softest groan escaped him and he walked me backward to the wall, pressing against me, opening his mouth against mine. I tasted beer, mingling with peppermint, and wondered if I’d ever know what he tasted like under normal circumstances. I shoved that particular musing out of my head immediately, content to focus on the mind-boggling here and now: I was making out with Max Holden. 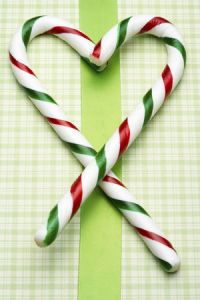 3 thoughts on “Christmas in May”