Today’s Friday Five is a list of intriguing YA books that have either just come out or are coming out in the next few months. Their premises are fresh and compelling, their covers are beautiful, they all boast a romantic element, and several are written by debut authors. All blurbs are from Goodreads, followed by my brief commentary. Feel free to click on the covers for each book’s Amazon link. You may also click on the author’s name to be linked to their website. 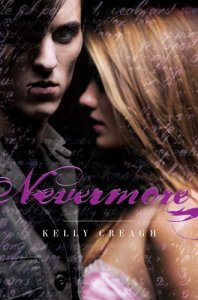 Cheerleader Isobel Lanley is horrified when she is paired with Varen Nethers for an English project, which is due—so unfair—on the day of the rival game. Cold and aloof, sardonic and sharp-tongued, Varen makes it clear he’d rather not have anything to do with her either. But when Isobel discovers strange writing in his journal, she can’t help but give this enigmatic boy with the piercing eyes another look. Soon, Isobel finds herself making excuses to be with Varen. Steadily pulled away from her friends and her possessive boyfriend, Isobel ventures deeper and deeper into the dream world Varen has created through the pages of his notebook, a realm where the terrifying stories of Edgar Allan Poe come to life. As her world begins to unravel around her, Isobel discovers that dreams, like words, hold more power than she ever imagined, and that the most frightening realities are those of the mind. Now she must find a way to reach Varen before he is consumed by the shadows of his own nightmares. His life depends on it.

**So much about this book intrigues me; Varen’s description, the good girl/bad boy relationship, the Poe references, and the dark tone of both the blurb and the cover. Looking forward to getting lost in this one!**

**I am so not a fantasy person. Dragons, especially, do nothing for me. Still, I was automatically drawn to Firelight’s cover (stunning!) and what seems to be a life-and-death romance brewing between Jacinda and Will. Firelight seems refreshing and engaging.

’s rebelliousness leads her family to flee into the human world, she struggles to adapt, even as her draki spirit fades. The one thing that revives it is Will, whose family hunts her kind. Jacinda can’t resist getting closer to him, even though she knows she’s risking not only her life but the draki’s most closely guarded secret.Jacinda—the descendants of dragons who can shift between human and dragon forms. But when drakiis special even among the  JacindaWith her rare ability to breathe fire,

Seth McCoy was the last person to see his best friend Isaac alive, and the first to find him dead. It was just another night, just another party, just another time where Isaac drank too much and passed out on the lawn. Only this time, Isaac didn’t wake up. Convinced that his own actions led to his friend’s death, Seth is torn between turning his life around . . . or losing himself completely. Then he meets Rosetta: so beautiful and so different from everything and everyone he’s ever known. But Rosetta has secrets of her own, and Seth will soon realize he isn’t the only one who needs saving . . .

**So many secrets! I love a book with a male main character, especially ones that include romance. Also, I love when YA books tackle real-life issues (here, binge-drinking–among other things, it seems) that some might prefer be swept under the carpet. Very interested to see how Freefall plays out.

**This is one of the most gorgeous covers I have ever seen. I love books about twisted could-be-real-life societies, and Cassia’s society seems about as twisted as they come. Certain aspects of Matched remind me of Lois Lowry’s The Giver, which is one of my all-time favorite books, so I can’t wait to find out more about Cassia’s world.**

and Ky, between the only life she’s known and a path no one else has ever dared follow—between perfection and passion. Matched is a story for right now and storytelling with the resonance of a classic.XanderCassia has always trusted their choices. It’s barely any price to pay for a long life, the perfect job, the ideal mate. So when her best friend appears on the Matching screen, Cassia knows with complete certainty that he is the one . . . until she sees another face flash for an instant before the screen fades to black. Now Cassia is faced with impossible choices: between

Anna was looking forward to her senior year in Atlanta, where she has a great job, a loyal best friend, and a crush on the verge of becoming more. So she’s less than thrilled about being shipped off to boarding school in Paris — until she meets Étienne St. Clair. Smart, charming, beautiful, Étienne has it all . . . including a serious girlfriend. But in the City of Light, wishes have a way of coming true. Will a year of romantic near-misses end with their long-awaited French kiss? Stephanie Perkins keeps the romantic tension crackling and the attraction high in a debut guaranteed to make toes tingle and hearts melt.

**I follow Stephanie Perkins on Twitter and read her blog. Let me tell you, she seems absolutely delightful. And her book… I love a good contemporary romance and Anna happens to be set in France, the most romantic city in the world. This book has gotten some wonderful reviews and some amazing blurbs, which all make me even more eager to read it!**