Much like January, March seemed to drag on FOREVER. I feel like I  read a whole library of books, and there were several standouts, including one that’s a new favorite.

1. The Secret Year by Jennifer Hubbard – I wish more of this story had been set during the time of Cole and Julia’s secret relationship. That said, I did enjoy Cole. He’s the supposed to be a bad boy from the flats, but really he’s sensitive and relatable. Not the cliché he could have been.

***2. Invincible Summer by Hannah Moskowitz (courtesy of Simon and Schuster eGalley) – Thought about this one long after I finished reading. The beach setting was fantastic and the dysfunctional family dynamics were so well written.  Chase “Everyboy” McGill ended up becoming someone I wish I really knew.

3. A sort of teens-in-peril novel I had high hopes for and ended up really disliking. The characters were flat, the voice was flat, and the ending was shockingly abrupt. While “clean teen” has its place, it did not work for this book. Fifteen-year-old guys in life-or-death situations do NOT say, “Oh, darn it!”

***5. Confessions of the Sullivan Sisters by Natalie Standiford – While I think “quirky” is over used in YA literature, it’s the perfect word to describe this family, and this book. The writing is fantastic. Funny at times, heartwarming, and completely honest. Confessions is different from what I normally read… in a good way.

***6. Where She Went by Gayle Forman (courtesy of an ARC) – I went into this book with one part excitement and two parts trepidation–I didn’t want anything about it to ruin my love for If I Stay. Luckily, Where She Went did the near-impossible: improved Adam and Mia’s story exponentially. I loved Adam as a narrator, and I loved how Gayle Forman was brave enough to take the story to difficult places. If you’re an If I Stay fan, I don’t think you’ll be disappointed in this follow-up.

***7. We’ll Always Have Summer by Jenny Han (courtesy of Simon and Schuster eGalley) – Sigh… I absolutely adore Jenny Han’s Summer trilogy and this final book did not disappoint. Something about the dynamic between Belly, Jeremiah and Conrad really gets me. The longing, the romance, the perfectly teen perspective of Belly… LOVE! Oh, and I totally think Belly made the right choice in the end. 🙂

8. Sea by Heidi R. Kling – For some reason this one was hard for me to get into, but when I finally did I was sucked in. The Indonesian setting was very cool, and the love interest, Deni, was so different from the usual YA boy. I’m normally not a fan of bittersweet endings, but somehow Sea‘s was fitting.

***9. Cryer’s Cross by Lisa McMann – I’ve never read anything by Lisa McMann so I had no idea what to expect. I was very impressed. This story is as creepy and weird as the book’s cover, and the protagonist, Kendall, is very cool. Also, cheers to the super hot and sometimes humorously cold romance between her and Jacian.

***I’ll say that any one of the books I starred above could have been Book of the Month had I not been so swept away by one in particular. They were that good. But there was one book that I fell head over heels in love with, one that made me all but forget about the others. That book was… 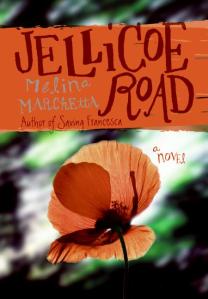 From the book jacket: In this lyrical, absorbing, award-winning novel, nothing is as it seems, and every clue leads to more questions. At age eleven, Taylor Markham was abandoned by her mother. At fourteen, she ran away from boarding school, only to be tracked down and brought back by a mysterious stranger. Now seventeen, Taylor’s the reluctant leader of her school’s underground community, whose annual territory war with the Townies and visiting Cadets has just begun. This year, though, the Cadets are led by Jonah Griggs, and Taylor can’t avoid his intense gaze for long. To make matters worse, Hannah, the one adult Taylor trusts, has disappeared. But if Taylor can piece together the clues Hannah left behind, the truth she uncovers might not just settle her past, but also change her future.

Jellicoe Road joins If I Stay, The Sky is Everywhere and Stolen as one of my all-time favorite YA novels. I heard more than once, “The first hundred pages are strange and confusing… STICK WITH IT!” I’m so glad I did. Two stories woven together, mystery, romance, perfect teen dialogue… I loved this book more than I can adequately describe… but I’ll try.

First, lets talk about Jonah Griggs. It’s almost as if he was written just to make me swoon. There are a lot of YA guys I dig, but Jonah… He’s exactly my type. Rugged, brave, stubborn, loyal, sort of crass and super sweet with Taylor. Plus, he’s a cadet, he enjoys tramping around in the woods and he wears fatigues. What can I say? I’ve been married to a soldier for almost eight years. It’s my thing.

And Taylor. She’s severely lacking in people skills, but at the same time she’s awesome. No nonsense, vulnerable and erratic. I loved her interactions with her friends Raffy and Santangelo, but I especially adored any scene she shared with Griggs. She forced him to confront his fears, just as he did to her. She challenged him, just as he challenged her. Neither of them ever once backed down from the layers of conflict that stood in their way. They’re a perfect match.

Jellicoe Road‘s mystery and the way it unfolds over two separate storylines, decades apart, is genius. While I knew early on that somehow all the characters and plotlines would eventually come together, the conclusion was a true surprise. Melina Marchetta has a knack for connecting even seemingly insignificant threads in the most satisfying ways.

Fair warning: Jellicoe Road‘s plot, pacing and writing might make you want to quit reading forever. When I finished, I was sure I’d never find another book that moved me the way this one did. The mystery is perfectly layered, the setting (Australia!) is all-consuming, and the characters got right inside my head and have been camping out there ever since. And if you’re a writer, well, be prepared to feel completely incompetent. Still, I highly, HIGHLY recommend this book.

What’s the best book you read in March?