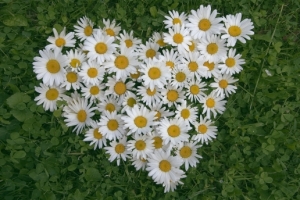 May proved to be way too busy, with some extreme highs and lows in both my writing and personal life. Still, I managed to get quite a bit of reading done. Here’s my wrap up:

Wicked Lovely by Melissa Marr – Once I was able to get over the craziness of invisible faeries walking among us, I mostly enjoyed this book. The world building was very cool and I especially liked Donia, a tragically damaged supporting character. My gripe came at the end, when the main character got everything she wanted, free of sacrifice, Breaking-Dawn-style.

Darker Days by Jus Accardo – A beta read for one of my super talented critique partners. You can’t read it yet, but I hope you get to soon because this one is all kinds of amazing!

You Wish by Mandy Hubbard – Normally I like my books dark and depressing, but by the end of the first chapter of You Wish, I was hooked. Fantastic voice, enviable wit, laugh-out-loud funny. Plus, it’s set in a town that neighbors mine, which is always fun. I recommend this one as a light, summery read.

Forbidden by Tabitha Suzuma – Part of me loved Forbidden, while another part was so weirded out by the brother/sister romance that at times I had difficulty absorbing the narrative. Still, the writing was gorgeous and the story (the ending, especially) packed quite an emotional punch. I recommend Forbidden for anyone who appreciates a truly–ahem–forbidden romance, but only for those not disturbed by a very controversial topic.

The Adoration of Jenna Fox by Mary E. Pearson – I’m not normally a reader of sci-fi (I didn’t even realize Jenna was sci-fi when I bought it), but I thought this book was fantastic. A little slow to start, but because the voice was so unique and the writing so flawless, I didn’t mind . It picked up around page 100 though, and by that point I was completely hooked. There are so many twists and turns, Jenna is almost a study in the plotting of and unfolding of a great mystery.

The Year of Fog by Michelle Richmond – If I wrote adult fiction, this is EXACTLY the kind of book I’d want to produce. It’s the story of a little girl who goes missing while playing on a foggy beach with her father’s fiancee, and the guilt, grief and constant state of unknowing that take place after. My mom recommended it, saying, “Read it. You’ll never let go of your daughter’s hand in public again.” Yeah. Pretty much.

And… May’s Book of the Month is Forget You by Jennifer Echols. 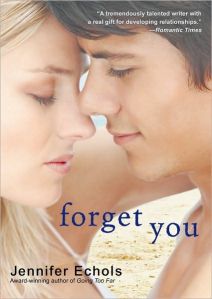 From Jennifer Echol’s site: There’s a lot Zoey would like to forget. Like how her father has knocked up his twenty-four-year old girlfriend. Like Zoey’s fear that the whole town will find out about her mom’s nervous breakdown. Like darkly handsome bad boy Doug taunting her at school. With her life about to become a complete mess, Zoey fights back the only way she knows how, using her famous attention to detail to make sure she’s the perfect daughter, the perfect student, and the perfect girlfriend to ultra-popular football player Brandon. But then Zoey is in a car crash, and the next day there’s one thing she can’t remember at all–the entire night before. Did she go parking with Brandon, like she planned? And if so, why does it seem like Brandon is avoiding her? And why is Doug–of all people–suddenly acting as if something significant happened between the two of them? Zoey dimly remembers Doug pulling her from the wreck, but he keeps referring to what happened that night as if it was more, and it terrifies Zoey to admit how much is a blank to her. Controlled, meticulous Zoey is quickly losing her grip on the all-important details of her life–a life that seems strangely empty of Brandon, and strangely full of Doug.

There are so many things I adored about this book, I think list form will work best for all the gushing I’m about to do…

1) Cover – See the way he’s gazing at her all adoringly? And see how she looks at peace, like she only ever wants to be with him? That’s what initially drew me in.

3) Swimming – I swam competitively in high school. It’s a difficult sport to get right on paper, especially if you’ve never actually done it. I’m not sure what Jennifer Echol’s background with swimming is, but in my opinion, she nailed it. From the rush of diving from the starting blocks to the scent of chlorine that lingers on your skin hours after leaving the water, I totally got why Zoey loved the sport.

4) Dialogue – Some of the best teen dialogue I’ve read, hands down. Everything that came out of Zoey and Doug’s mouths was honest and frank, often funny. Jennifer Echols doesn’t filter anything, and I found that very refreshing.

5) Voice (Zoey’s Inner Monologue, in Particular) – Zoey is dry and intelligent, yet confused and often naive. She’s controlling and that shows throughout the story, within all of her relationships (except, maybe, her father). I found myself laughing at her observations and commiserating with her troubles repeatedly. I started Forget You midmorning, and Zoey’s narration kept me reading all day, until I finished early evening.

6) Zoey – The YA novels I enjoy most are ones with female protagonists that are flawed, yet relatable and with inner strength. Examples: Taylor from Jellicoe Road, Lennie from The Sky is Everywhere, Violet from The Body Finder and Mia from If I Stay. Forget You‘s Zoey falls into this group. She has a way of justifying irresponsible decisions and bad behavior, yet she’s obviously a smart girl. I got the sense that even though she excused away a lot (especially in regard to Brandon and her feelings for Doug), deep down she knew exactly what was going on. She just wasn’t ready to face it.

7) Doug – Why didn’t Doug go to my high school? Despite (or maybe because of?) his snarkiness, semi-dysfunctional family, and occasionally sneaky, self-serving ways, Echols manages to make him utterly and completely appealing. Maybe it’s that we see him through Zoey’s eyes, or maybe bad boys who are secretly good are just extra alluring. Whatever the case, Doug has become one of my favorite YA love interests.

8) Romance – Forget You is, at its core, a romance, and wow is it steamy. Quite possibly one of the most, um, graphic YAs I’ve read, but it works. Both Zoey and Doug are so candid throughout the book, to gloss over their intimate interactions would have been unnatural.

Yep… Forget You joins my short list of favorite YA contemporaries. I recommend it to anyone who’s read and enjoyed  Jennifer Echol’s other books, anyone who enjoys dramatic (but not melodramatic) romance, and anyone who likes layered and truly realistic teen fiction.

So? What’s the best book you read in May?

14 thoughts on “May’s Book of the Month”