What are the FIVE best ages of your life and why?

1. Zero to Twelve – This might be a bit of a cop-out, but yeah… I had a lovely childhood full of wonderful people and experiences. There’s not one particular age I can pinpoint as the BEST of my childhood, but I can say that somewhere just after twelve, preteen anxiety and awkwardness set in. It was all down hill from there.

2. Nineteen – High school was, all in all, a pretty tragic experience. Though I had some great friends (a few I’m still friends with!) and was athletic, I was painfully shy and always obsessing about what people thought of me. I didn’t date or go to dances because I was majorly lacking in confidence. But by the time I turned nineteen and started college (Go Cougs!), I came into my own. At nineteen, I nailed down a career path (teaching, which turned out to be fairly temporary), joined a sorority (you can’t help but be social in the Greek system), and met my future husband (who has always been the life of the party and, whether he realizes it or not, played a big part in bringing me out of my shell).

3. Twenty-Two – A huge, wonderful year! I graduated from college, got married, and moved from Washington to Arizona. Twenty-two was the age at which I became a real grown-up. My husband and I bought cars, rented an apartment, learned to manage money, and figured out how to cook for ourselves. I got my first full-time job (management at Bath and Body Works… thank you, teaching degree), and we also acquired our first “baby,” a mutt named Lucy Pup-perman, who’s still driving me crazy.

4. Twenty-Five – By this point, we were living in Tennessee (loved that duty-station!), I was actually using my degree to teach fifth graders, and we had upgraded from an apartment to a house. My husband was deployed for the first chunk of this year which sucked up and down, but other than that,  life was really great. I had the most amazing class, coworkers I adored, and friends who were loads of fun. I went on a fabulous cruise with my parents and brothers, and got to welcome my husband home from a year in Iraq. Twenty-five was also the age at which I ended up with a bun in the oven. 🙂

5. Twenty-Six to Thirty – I know, I know… another cop-out, but I really can’t distinguish any one year since my daughter’s birth as greater than another. She’s just my absolute favorite person in the world, and she makes even the challenging times (three more deployments, sick family members, stressful moves) more bearable. Plus, it was during the last few years that I started writing with the goal of publication which, despite its extreme highs and lows, has been one of the most fulfilling experiences I’ve had.

Oy. I bet you didn’t think you were going to  get my whole life story out of that simple prompt.

Do tell: What were the five best ages of your life?

And, in an effort to stick with the Friday Five theme (for once!), I present you with FIVE writerly funnies… 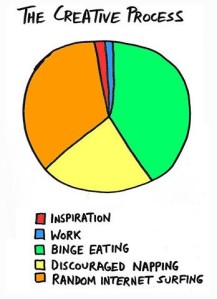 Hope your weekend is full of awesome!