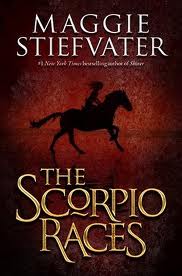 From Goodreads: It happens at the start of every November: the Scorpio Races. Riders attempt to keep hold of their water horses long enough to make it to the finish line. Some riders live. Others die. At age nineteen, Sean Kendrick is the returning champion. He is a young man of few words, and if he has any fears, he keeps them buried deep, where no one else can see them. Puck Connolly is different. She never meant to ride in the Scorpio Races. But fate hasn’t given her much of a chance. So she enters the competition — the first girl ever to do so. She is in no way prepared for what is going to happen.

Honest Confession: I wasn’t really planning to read The Scorpio Races. I’m not much of an equine person (I’ve even never read Black Beauty!) and the whole bloodthirsty water horse thing sounded way too bizarre to get behind. But then my friend Erin Bowman (who has exceptional taste in books!) read Scorpio and gushed up and down about how gorgeous the writing is, how much she adored the characters, and how deeply their relationships moved her.

I knew I had to give The Scorpio Races a go…

The Scorpio Races is told in dual narration, from the point of view of main characters Sean and Puck, which worked beautifully. Sean is thoughtful and often described as patient and “still.” In contrast, Puck is feisty and has trouble holding her tongue (at one point, she snaps on Sean when he demands that she pick up his jacket from the beach and doesn’t say please!). I loved Sean and Puck for different reasons, but it was the loyalty and bravery they had in common that made it so easy to invest in them. Sean and Puck are both up against SO much, yet there are things neither will compromise: dignity, love for their horses, and, in Puck’s case, devotion to her family.

Scorpio is, at its heart, a story about love–but not in the way you might think. It’s light on romance (though Sean and Puck have intense chemistry), focusing more on the love Puck has for Thisby and her brothers, and the love Sean has for his horse, Corr. Oddly, it was Sean and Corr’s dynamic I was most enamored with. There is a deep, deep bond between the two of them, one I felt wholeheartedly, one that threatened to shred me during the final pages of the story.

Maggie Stiefvater is a master of prose. The island of Thisby came alive within the pages of Scorpio. The beach, the Malvern stables, the bakery, the Connolly kitchen, the wind-ravaged cliffs… I was there, living and breathing it all in. The atmosphere of the story was as much a character as Sean and Puck, Corr and Dove, and Maggie’s descriptions are utterly enviable. Her setting became real, as did her dynamic, well-rounded cast of characters. Her words are elegant and carefully chosen, yet they read as effortless.

The most common criticism I’ve seen cited in reviews of Scorpio is its slow pace. To that, I say: Who cares?! I’d so much rather read a book with a slow pace that allows for mood development, character growth, and emerging, realistic relationships than a page-turner that’s lacking in all of the above. I can’t help but think that Scorpio would have suffered had some of the more leisurely descriptions and detailed passages been cut. Surely we would have missed out on the beauty of Thisby, the quiet intensity of Sean Kendrick, the lively spirit of Puck Connolly, and the connection these characters shared with their horses.

If you haven’t picked up a copy of The Scorpio Races yet, I hope you will. It’s a beautiful book, one that’s earned its way onto my Favorites list.

Check out what the other Bookanistas are up to today:

Lisa and Laura Roecker gush about HOW TO SAVE A LIFE
Shannon Messenger raves about CINDER–with an ARC Giveaway!
Megan Miranda spreads the love for UNTRACEABLE
Corrine Jackson falls for UNDER THE NEVER SKY
Stasia Ward Kehoe celebrates MY VERY UNFAIRY TALE LIFE
Debra Driza sings the praises of EVERYBODY SEES THE ANTS

Have you read The Scorpio Races? What did you think?

18 thoughts on “Bookanistas: THE SCORPIO RACES”