Today’s Bookanista recommendation: The Future of Us, by Jay Asher and Carolyn Mackler… 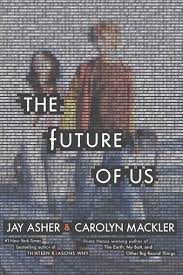 From Goodreads: It’s 1996, and Josh and Emma have been neighbors their whole lives. They’ve been best friends almost as long – at least, up until last November, when Josh did something that changed everything. Things have been weird between them ever since, but when Josh’s family gets a free AOL CD in the mail,his mom makes him bring it over so that Emma can install it on her new computer. When they sign on, they’re automatically logged onto their Facebook pages. But Facebook hasn’t been invented yet. And they’re looking at themselves fifteen years in the future. By refreshing their pages, they learn that making different decisions now will affect the outcome of their lives later. And as they grapple with the ups and downs of what their futures hold, they’re forced to confront what they’re doing right – and wrong – in the present.

Honest Moment: I had my concerns about this book. While I’ve enjoyed work by Jay Asher and Carolyne Mackler in the past, I worried that The Future of Us might come off as too preachy. Live for the moment, appreciate the life you have, you never know quite what the future holds… I wondered if these lessons might be too prevalent–too in your face–to make for a compelling story.

Luckily, while the themes I mentioned above are obvious within the pages of The Future of Us, they certainly don’t get in the way of an entertaining story. Quite the opposite, in fact! Here’s what I loved:

1. The unique and vibrant voices of Josh and Emma, a dual narration pulled off  flawlessly by two incredible contemporary authors.

2. Josh’s wit and the dry-but-spot-on observations he makes about what’s going on around him, especially the bits concerning his peers. He made me laugh out loud repeatedly!

3. All the nineties throw-back references: Scrunchies, Cindy Crawford, Sony Discmans (Discmen?),  answering machines, Dave Matthews Band, “You’ve got mail!” Such a fun blast from the past for this ’99 grad!

4. Clear character arcs that make sense. Sure, they happen fairly quickly (the story takes place in less than a week), but I believed in the changes that occurred within both Josh and Emma.

5. The sort of cheeky examination of Facebook and how it’s changed our society. Why ARE people posting about what they had for dinner, or–worse–venting their deep, dark, often inappropriate secrets?

All in all, I had a blast reading The Future of Us. It was fun to reflect on how much things have changed in a decade and a half, and to contemplate the what-would-I-do scenarios that could have played out if I’d been in Josh and Emma’s shoes when I was in high school.

What about you? If you had the opportunity to see fifteen years into YOUR future, would you want to?

And don’t forget to visit the other Bookanistas today!

20 thoughts on “Bookanista Recommendation: THE FUTURE OF US”