Lots of people do wrap-ups at the end of the year, but lovely posts by Jessica Love and Erin Bowman in particular have inspired me to do one of my own. Fair warning: This is a LONG post. It’s also full of pictures, many of which include my daughter. If you’re getting bored with those, please accept my apologies. She’s just so darn cute!

All in all, 2011 was a strange year, full of very high highs and some super low lows. Here’s what sticks out…

High – Revised and started querying my manuscript, Where Poppies Bloom, in hopes of snagging a fantastic literary agent.

High – Cheered on the Seahawks, a sort of last hurrah with my husband before he headed out to Ranger School.

Low AND High – Said a sad goodbye my hubby and began a year of serious bonding with my favorite girl.

High – Took serious inventory of my eating and lifestyle habits and decided to make some major changes. I’ve since become a healthy eater and happy runner and yoga-er. I’ve lost a significant amount of weight and feel amazing.

Becoming a Low – Had a few close calls with Poppies, revised, queried some more. (Are we beginning to see a pattern here?)

Low – My girlie lost her first tooth. (Okay, it was knocked out. She cried. I did too.)

High – I acquired a niece! I’d already been blessed with three nephews, so this was a VERY exciting event! Isn’t she sweet?

High – While Poppies was in the hands of several agents, I decided to give it a mental rest in favor of something shiny and new. This idea (creatively entitled Bus WiP) resulted in a detailed outline that’s still awaiting a first draft. 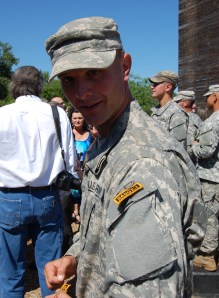 High – Trekked across the country to watch my husband graduate from Ranger School in Georgia. So proud of him! (Also, he’s not normally this thin. Ranger School is grueling.)

High – Received an offer of representation from an amazing agent while on vacation! Notified others who were reading. Waited…

High – Visited Disney World with my parents, my husband and our girl, and my in-laws. Such a wonderful trip!

High – Received a second offer of representation. Contemplated. Made a challenging but thrilling decision. Signed with Agent Vickie. Celebration ensued!

Low – Watched and worried as my dad’s health mysteriously deteriorated, culminating in TWO brain surgeries and a discouraging diagnoses. I can’t really describe what this was like, except to say that watching a man who’s appeared invincible your entire life rapidly decline is absolutely heartbreaking.

Low – Waved a tearful goodbye to my husband as he deployed to Afghanistan. Again, it’s hard to express how horrible a feeling it is to say farewell to the person you love most, especially knowing there’s a possibility he could be hurt or killed while away. It’s the very best part of yourself, ripped away.

High – Got down and dirty with the Poppies revision ideas Agent Vickie suggested. Fleshed out characters. Upped the mystery. Added detail to the setting and backstory. 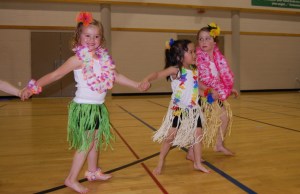 High – Fell in love with my small town all over again.

High – Successfully completed my first 5K, and my first round of revisions. 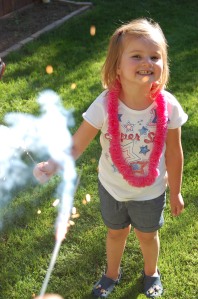 High – Celebrated the Fourth of July with family and friends.

Low – Dealt with this hideous creature cock-a-doodle-dooing all day and night for weeks. (I found out later that my neighbor shot him. Yikes.)

High – Dove into another round of revisions. (Yes. I am freakishly pragmatic.)

Low – Said goodbye to Harry Potter. The end of an era, I tell ya! 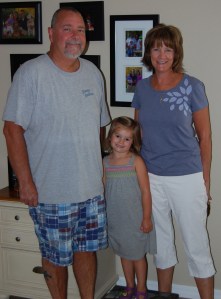 High – My girlie and I visited my parents in Phoenix. My dad was weak but beginning to recover, thank goodness.

…with a very Tangled Birthday Bash!

High – Completed a second 5K, and submitted another revised version of Poppies to Agent Vickie. Getting close!

Low – Rushed my Sweet Pea to the ER after she fell face-first on the pavement. Tears all around. A terrifying night, but luckily there was no lasting damage.

High – Contemplated and planned for a rewrite of a previously “finished” manuscript. This one’s still in the works, and it’s one I’m really excited about. 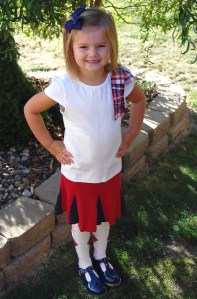 High – My girlie began another year of preschool. Where has the time gone?! 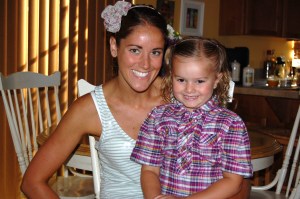 Low – Begrudgingly accepted that Fall was on its way. We’re sunshine girls… What can I say?

High – Our annual trip to the local Pumpkin Patch.

High – Halloween with Rapunzel. (I was Hermione Granger, obviously.)

High – I was invited to join the Bookanistas, a group of writers who review exceptional picture, middle grade, and young adult literature.

High – Lots of bonding with fantastic friends, especially this girl, who I adore! 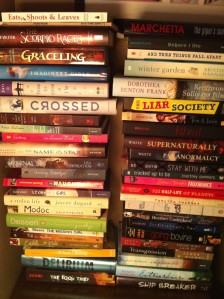 High (sort of) – Had all kinds of fun with my family, cheering my beloved Cougs on to an Apple Cup… LOSS. *sigh* 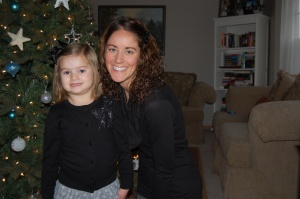 High – Got all dolled up to see Cinderella at the Fifth Avenue Theater in Seattle. (Loved.) 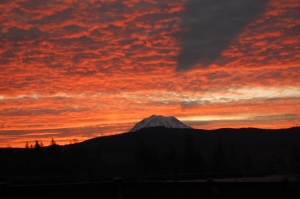 Low – Accepted Winter for its frigid days and early nights. Boo. Still, with sunrises like this one, it’s not all bad. (How cool is the shadow of Mt. Rainier on the clouds?) 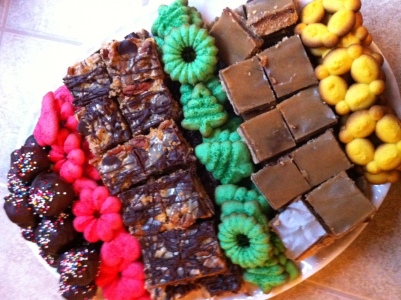 High – Rediscovered my love of baking. Now I just need my husband to return so he can eat all my confections!

Low – Speaking of my husband, I came to terms with the fact that my daughter and I will be spending another holiday season without him. Painful, but I’m so thankful this deployment is winding down. 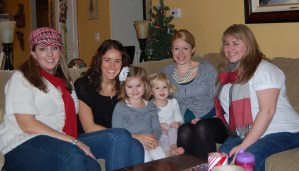 High – Reconnected with old friends. I’ve known these girls since I was sixteen (one since I was ten!).

There you have it… My 2011. The highs, the lows, and everything in between. This post (while incredibly time consuming to put together!) was a fun trip down memory lane. It’s reminded me how lucky I am, how much I’ve grown in twelve months, and, most importantly, that the highs always outnumber the lows.

Tell me, what was your highest high of 2011? Your lowest low?