Flat, overcooked (or sometimes raw in the middle), unpalatable. 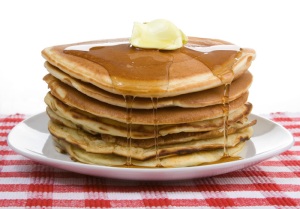 The other day on Twitter, someone I follow compared a first novel to a first pancake: good practice, but usually they ought to be thrown away. I wish now I could recall who it was who made the tweet so I could give them credit for their wisdom, but alas, my memory sucks. Still, the comparison stuck with me, mostly because I’ve been thinking a lot about my first novel… you know, Novel One, the one I queried the heck out of to less than stellar results?

Having recently completed revisions on Novel Two (WIP, which I happen to be quite proud of), I’ve gotten some distance, gained some perspective, and learned a lot. Now, looking back on Novel One, I see its flaws. Too-perfect hero, lack of major external conflict, occasionally passive voice. The good news? WIP doesn’t suffer from any of those weaknesses.

Don’t get me wrong, I love Novel One for what it is, for what it taught me, for giving the first characters who truly spoke to me a home, but frankly, it was a practice run. Is it fixable? Maybe, with a major overhaul of the structure, plotting, conflict and characters—a complete rewrite, I think.

But do I want to rewrite it? I’m torn. Someday, perhaps. Like I said, I do love it, and my very fabulous CP sees its potential. For now, it waits patiently in my Dell while I tackle querying WIP, my new baby. Also, I’m very nearly ready to dive into a new novel (shall we call it Novel Three?) which is going to require some pretty major preliminary research and stems from a darker, more controversial place. So, for now, Novel One is metaphorically trashed, though it will always hold a special place in my heart.

I’m curious… what was your experience with your first novel? Was it a success? What were its weaknesses? Strengths? Where is it now?