A few weeks ago, my cousin posted this as her Facebook status update:

I immediately “Liked” her post (what I do when I want to retweet something that strikes me as funny or clever or profound, but can’t because Facebook doesn’t have a retweet equivalent). Then I replied: 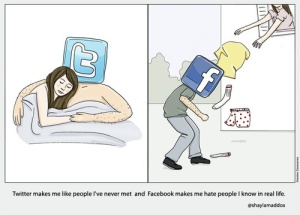 In fact, I don’t like Facebook much at all. I only have an account (which, admittedly, I update fairly regularly) because I have friends and family sprinkled throughout the country and I feel obligated to share pictures and anecdotes having to do with my daughter. Every time I log onto Facebook I’m inwardly cringing. I know with a fair amount of certainty that there will be some random update from an acquaintance that’s an over-share, a complete bore, a bitchfest, or riddled with spelling and grammar errors. Ugh… and the ads. I’m so over the ads. And the games… Farmville? Really? And that little thumbs up next to the “Like” button… that really bugs me.

And then there’s Twitter. I LOVE Twitter. I love the people I’ve “met” there. I love the fast pace and the ease with which information is exchanged. I love the mix of fun and networking, entertainment and business. I love that I can follow or unfollow people at will, without hurt feelings or dramatic blow ups. I love that I can connect with people who enjoy what I enjoy (books, reality TV, tasty treats) and who do what I do (write, read, parent). I love the unique perspectives and the diverse cultures. I love refreshing my feed, knowing I’ll laugh or learn something new or bond with an online friend over something as silly as brownies or annoying stray roosters. 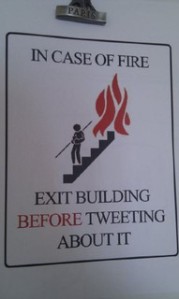 I like to hope I wouldn't need this reminder...

I know people who think Twitter is dorky, to which I reply: What?! Clearly these people are not tweeting and they’re obviously missing out. Twitter is all about swapping information and building genuine connections. You know, a little like Facebook. Only better.

Yes, I know there are all kinds of social media (most of which I know nothing about–I’m looking at you LinkedIn and Tumblr and Google +), but for now I’m sticking with Facebook (out of a warped sense of duty) and Twitter (because it rocks!).

What’s your social media drug of choice? Do you Facebook? Twitter? Other? Which do you prefer and why?

Oh, and have you entered my The Unbecoming of Mara Dyer giveaway? It ends this Thursday, so hurry! 🙂