First and foremost, huge CONGRATULATIONS to my fantastically talented CP Jus Accardo, who now has a cover for her amazing debut YA novel, Touch (available November, 2011). Observe the awesomeness: 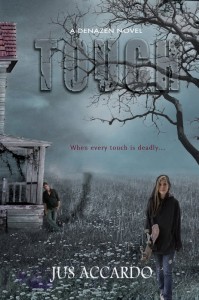 A fine example of perfectly capturing the mood of a book...

And of course, the official blurb: When a strange boy tumbles down a river embankment and lands at her feet, seventeen-year-old adrenaline junkie Deznee Cross snatches the opportunity to piss off her father by bringing the mysterious hottie with ice blue eyes home. Except there’s something off with Kale. He wears her shoes in the shower, is overly fascinated with things like DVDs and vases, and acts like she’ll turn to dust if he touches her. It’s not until Dez’s father shows up, wielding a gun and knowing more about Kale than he should, that Dez realizes there’s more to this boy—and her father’s “law firm”—than she realized. Kale has been a prisoner of Denazen Corporation—an organization devoted to collecting “special” kids known as Sixes and using them as weapons—his entire life. And, oh yeah, his touch? It kills. The two team up with a group of rogue Sixes hellbent on taking down Denazen before they’re caught and her father discovers the biggest secret of all. A secret Dez has spent her life keeping safe. A secret Kale will kill to protect.

Guys. I have read this book. It is INCREDIBLE. Add it on Goodreads HERE. And, if you’re so inclined, pre-order it from Amazon HERE. 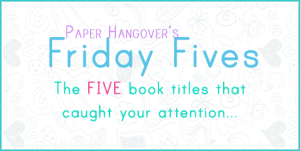 I love titles that are catchy, intriguing, and image-inducing. I love titles that make me ask a question or wonder about a character. The below titles stole my attention and I’ve added them to my Goodreads To-Read queue based (originally) on title and title alone. I’ve yet to read them, but I’m hoping the stories behind these fantastic titles will live up:

1) Daughter of Smoke and Bone by Laini Taylor

2) The Cavendish Home For Boys and Girls by Claire Legrand

And, I chose to read the following books based solely on their fabulous titles. I can honestly and happily confirm that each one is equal to (or better than!) the splendor printed on its cover:

1) The Body Finder by Kimberly Derting

2) The Summer I Turned Pretty by Jenny Han

3) The Forest of Hands and Teeth by Carrie Ryan

5) The Face on the Milk Carton by Caroline B. Cooney

What book titles do you love? Are there any you’re not a fan of? 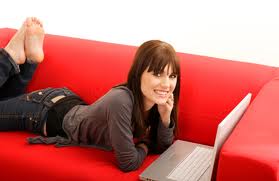 And a fun Would You Rather…?

Would you rather live a month without the ability to talk on the phone or the freedom to check your email?

(This one’s easy for me! I’d MUCH rather check my email than talk on the phone… you?)

Have a wonderful weekend! 🙂