Back in 2014, I wrote a book during National Novel Writing Month. Actually, I started a few weeks before, in October. I wrote about 10K words, then another 50K words in November (I “won” NaNoWriMo — yay!) and then I finished a final 10K words in February of 2015. I did a lot of revising (as usual, because I write the most convoluted first drafts ever), and then I sent the manuscript to my CPs. I spent a million more months revising before putting the story on the back burner because amazing things started happening with Kissing Max Holden.

Fast forward to when my agent and I started chatting about what to submit to Swoon Reads as my option book. My 2014 NaNoWriMo project seemed like a perfect follow-up to Kissing Max Holden, so we sent the manuscript in. Time passed, meetings were had, emails were exchanged and then… 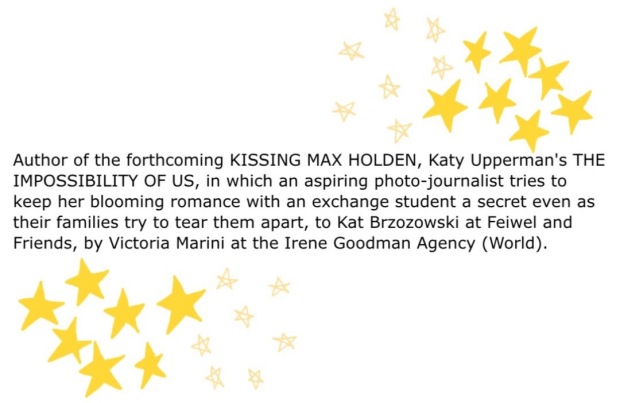 Swoon Reads bought a second book from me! I’m thrilled! I feel so lucky to be working with Kat Brzozowski (who is a brilliant editor) along with the rest of the Swoon Team, and I’m so thankful to my agent, Victoria Marini, who’s worked tirelessly for this deal.

So, what’s The Impossibility of Us about?  It’s a love story (duh) about a girl who wants to be a photojournalist and a boy who wants to be a writer. They come from different countries — different cultures — and there are a lot of forces working against them. There’s a cute dog, too, as well as a beautiful beach, and a lot of wishes sent to the wind. There’s also some kissing. Of course there is.

The Impossibility of Us is tentatively slated for 2018.
I can’t wait for you to read it!